Larry Page and Sergey Brin had only one goal: to create the perfect search engine

The history of Google, like so many others, was a matter of luck. Perhaps that is why for years the search engine made it clear in the most remembered –and playful– of its buttons: “I’m feeling lucky” (in English, “I’m feeling lucky”). A catchy claim that was also a declaration of principles from its creators.

It was luck that, in 1994, Sergey BriinJust graduated with a double degree in Computer Science and Mathematics and with a scholarship from the National Science Foundation, he was rejected at MIT and ended up opting for a PhD at Stanford. He had arrived with his family in Maryland, in the United States, when he was only six years old, when they obtained visas to leave his native Moscow.

larry page He had been born in Michigan in March 1976, thousands of miles from Stanford and Sergey, but he was the son of computer science professors and had grown up in an environment where computers were commonplace. However, these two boys from such different backgrounds had things in common: both had attended primary school in Montessori schools and had a particular interest in inventions. Both were of Jewish descent, although for Sergei things had been so hard that the Brin family had had to receive assistance from Israeli entities to settle in America, Larry’s, on the other hand, had never experienced economic hardship, and the hardest thing experienced was the premature death of his father, Carl, when he was 23 years old.

They met in 1995 at the Stanford New Ph.D. Candidate Orientation Seminar., but they didn’t go down well at all, tells the biography The Gatekeepers (Daniel Alef, 2011), about the origins of the giant that made the search for information a necessity and a business. “We were both kind of obnoxious: and Larry was one of those guys who has a comment for everything,” admitted Brin. But forced to spend time together in the graduate computer program, they discovered that the very things that irritated them about each other were what made them almost immediately “intellectual soul mates”.

Larry Page argued that an Internet search engine could rank links according to the frequency with which they were linked to other pages.

The genesis of Google is also how great ideas come about, and that idea, originally, was Larry Page’s. He argued that an Internet search engine could rank links according to the frequency with which they were linked to other pages. With Brin’s help, that idea morphed into PageRank, Search’s basic search algorithm. The first time they tested it was on the Stanford network in 1996.

Two years later, on September 4, 1998, together they had founded the start-up that would revolutionize the Internet and the way we think. After Google, no one would have any more doubts about an address, that actor in the movie that was so good that he had on the tip of his tongue, or the recipe for semolina gnocchi. CAs Sergey explained it then: “The Internet is the repository of all our knowledge”, it only had to be made available to users. And they did.

It was just the beginning: Google would manage to enter the lives of Western citizens to an unthinkable level then, introducing products such as YouTube, Google Earth, GMail, Chrome and the Android mobile operating systemto the point where it is difficult for anyone today to remember what the world was like – and how we communicated and related in most of our daily tasks – 24 years ago.

Brin’s focus was on the development of data processors. Page, for his part, was obsessed with the “concept of inferring the importance of a research paper, through its citations of other documents.” Together they wrote a paper titled “The Anatomy of the Large-Scale Hypertext Web Browser.” It was the beginning of a collaboration that would know no limits.

Then again the magic wand of luck touched them: they barely had a business plan when they received input from what is known as an “angel”, an investor willing to finance the company at its most critical moment, when it needs to grow and expand.

Sergey Brin Brin was chairman of Alphabet – Google’s parent company – until 2019, and has a fortune similar to Page’s. Today he is the seventh richest man in the world REUTERS / Ruben Sprich / File Photo

Andy Becholsheim was one of the founders of Sun Microsystems and his first meeting with him was at Stanford, at the home of one of his professors and mentors – David Cheriton. Brin and Page were such freshmen—and so financially insolvent—that they celebrated the next morning with breakfast at Burger King. They didn’t even have an account to receive the transfer of its providential benefactor: Google Inc. did not yet exist as a legal company.

This is how they created the company that September 4, more than two decades ago: they needed to give their enterprise a legal framework in order to receive donations. The first thing they did once the firm was incorporated was to deposit the initial capital provided by Bechtolsheim into an account. Later, they fulfilled the initiation rite of all Silicon Valley successes: they rented a garage for US$700 to a woman –Susan Wojcicki– who became so involved with the project that she ended up being a senior vice president at Google. The housewife’s sister went even further in her relationship with the creative duo and married Sergey. They had only one goal: “Create the perfect search engine”. And they were lucky, of course.

The following month they had already hired their first employee, and by December of that year they were already listed as one of the hundred most influential websites. But because the idea had come from a Stanford lab, the alumni had to strike a business deal with their university. They eventually settled it by giving him shares. Once again, chance was on their side: everyone was confident in the future of the company.

Google managed to enter an unthinkable level in the lives of Westerners (photo: Composition/Jose Arana)

For all its faults, by 1999, Google was already the best possible search engine on the Internet, capable of providing information that other sites could not connect. They had created a unique algorithm, capable of reading even hidden links. Among thousands of links and sublinks, the tool managed to rank which were the most similar and offer them in order. It was a colossal and definitive jump.

The only thing that Brin and Page needed to take the next step was more money, and they went looking for it with total security: as in the original claim of the site, they felt lucky. So much so that they were not willing to give up their own shares in the play. That was just growing up, and there was no ceiling.

It is written by David Vise and Mark Malseed, the authors of Google’s historyanother of the books that tells the feat: “There has been no new invention since Gutenberg that has empowered individuals and transformed access to information in such a profound way as Google”. Brin and Page got it right away, and once they optimized their browser, they started thinking about the information that was still off the web. Digitizing books and health was just the beginning. 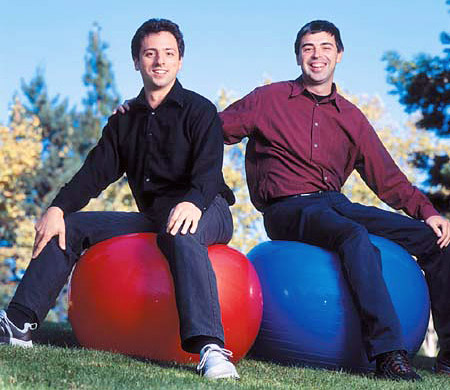 Brin and Page are now billionaires

Today, according to Forbes, Page – who was CEO of Google until 2011 – has a fortune valued by Forbes at more than US$1 billion, and he is still married to the mother of his son, the scientist Lucy Southworth. In 2013 he announced that he had paralyzed vocal cords due to an autoimmune disease. Doctors had spent years searching for a diagnosis: Google could hardly help here. He donates large amounts of money to philanthropy, especially for research on his pathology.

Brin was president of Alphabet – the parent company of Google – until 2019, and with a fortune similar to that of Page, he is today the seventh richest man in the world. He got married, had a child and separated from Anne Wojcicki, the sister of the owner of the founding garage. He was also in a love triangle with tycoon Elon Musk, and it is said that his last wife, Nicole Shanahan, left him for him – a wallet kills a heartthrob, but the largest wallet in the world is even more fatal. If anything, most of these details are reducible to a hidden spot in search rankings. Brin and Page are one of those cases where intelligence and luck make revolutions. And as in all revolutions, originally it was simply an idea.

What the creators of YouTube told Google
Google celebrated its 15 years in Argentina with announcements about connectivity, education and help for women’s projects in vulnerable contexts